Employee with High-Risk Pregnancy Seeks Accommodation, but Manager Allegedly Threatens to Fire Her.

Cierra joined the team at Hampton Inn as a maintenance technician in December 2016. Soon after starting, Cierra was diagnosed with a high-risk pregnancy. Cierra shared that her doctor set restrictions to help protect the baby, including no prolonged sitting, standing, walking, or lifting over 10lbs. She was still able to perform her job.

Soon after the diagnosis, Cierra requested a day off for a doctor’s appointment scheduled a week later. She then submitted her doctor’s note to the general manager, leaving it in the GM’s mailbox. The letter outlined the accommodations that Cierra would require, such as frequent bathroom breaks. A day or so later, Cierra verbally checked with her GM about receiving the note and reiterated her high-risk pregnancy diagnosis. 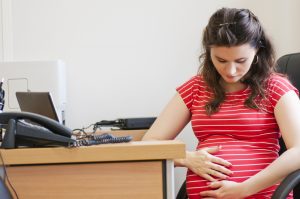 The Pregnancy Rights of Employees

The day before Cierra’s day-off for her doctor’s appointment, she suffered intense muscle spasms in her neck so she left work early. According to Cierra, the GM stopped her and said, “You have one more time to call out; doctor’s note or not, I’m firing you.” Realizing that she had the next day off for her doctor’s appointment, Cierra reminded her GM. The GM allegedly denied ever receiving Cierra’s request for the day off.

Three days later, Cierra’s health condition prompted her to need a day off. Feeling as though termination was inescapable if she took the day off with the excuse of her pregnancy, Cierra resigned. Cierra knows that her GM’s harassment began after finding out about her pregnancy, and Cierra felt that her only real option was to leave the job. No employee should suffer discrimination for a difficult pregnancy. As a client of KM&A, Cierra seeks her employee rights. KM&A advocates for employees like Cierra who have experienced pregnancy discrimination in the workplace.

Full text of this complaint, as filed with the District Court for the Eastern District of Pennsylvania, is available at docket no: 2:18-cv-00913-JS

For more information about this case, contact Attorney Jonathan Chase at 215-475-3504 or at jwc@lawkm.com.

NOTICE: All information contained in this statement comes from the Complaint which has been filed as a public record with the court. As dedicated civil rights attorneys, we strongly believe in the public value of telling our clients’ stories: violators can be held accountable, and other silent victims can feel empowered to stand up for their legal rights. Although we make every attempt to verify our clients’ claims, note that the defendant is expected to oppose our client’s position, and the court has not ruled one way or the other as of the date of this statement.
Employment discriminationgender discriminationPregnancy Discrimination