Shawn began working as a biomedical engineer at Jefferson Health in 1990. Throughout her years at the hospital, she was promoted twice, becoming a clinical engineer III. Shawn managed the department at Magee Rehabilitation Hospital, inspecting medical devices and ordering repairs and replacements.

In 1994, Shawn recalls that her supervisor made romantic overtures toward her. When she refused him, their work relationship deteriorated. According to Shawn, her supervisor began to blame her for anything that went wrong and assigned her extra work. Shawn complained to HR, but no satisfactory resolution occurred until Shawn was transferred to work under a different supervisor in 2001.

It was a while before Shawn noticed that she received about $58k each year while a similarly situated male employee received $82k each year. Shawn checked the national average for her position and discovered that it was $72k. 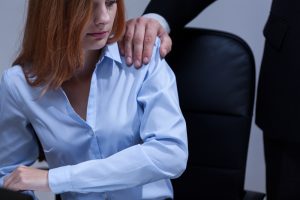 How To Prove Sexual Harassment At Work

In 2009, Shawn came under her old supervisor once again, and he picked up where he left off with his harassment. She forwarded his harassing emails to the director, and for a time, things calmed. In 2017, Shawn discovered that those with an “outstanding” on their employee review received pay increases. She shared that she was told that she was not eligible for a pay increase. In a conversation with a new supervisor, Shawn learned that she was underpaid in comparison with similarly situated male coworkers. According to Shawn, the new supervisor also told her that her previous supervisor was the reason behind her lack of pay increase.

In October, Shawn asked about her salary, and it was increased to $70k. However, she was not promoted. Shawn believes that this clearly demonstrates a violation of her right to equal pay since she had been working the role without the corresponding pay. As a client of KM&A, Shawn seeks her rightful pay and fights sex discrimination. KM&A represents clients who suffer sex discrimination in the workplace.

Full text of this complaint, as filed with the District Court for the Eastern District of Pennsylvania, is available at docket no: 2:18-cv-02959-RK

NOTICE: All information contained in this statement comes from the Complaint which has been filed as a public record with the court. As dedicated civil rights attorneys, we strongly believe in the public value of telling our clients’ stories: violators can be held accountable, and other silent victims can feel empowered to stand up for their legal rights. Although we make every attempt to verify our clients’ claims, note that the defendant is expected to oppose our client’s position, and the court has not ruled one way or the other as of the date of this statement.
sex discriminationunequal pay